A Cat in a Bag

"It would be too much to expect any honour from the Jolsons. Honour amongst thieves, maybe, maggots, never."
―Mark Hammond

A Cat in a Bag is the tenth mission in The Getaway. It is an independent mission for protagonist Mark Hammond.

Mark examins the bag containing the Yardie drug money and thinks he's hit the jackpot. He phones Liam and explains the situation to him. Liam is impressed with Yasmin in taking on Charlie but also warns Mark not to do anything stupid. Mark tells Liam that he can find the drug money at Rivington Street in the back of a car and decides that it's best to leave the cash in his safe hands. Mark then leaves Rivington Street, steals a car and makes a quick getaway from the Yardies and the police. He drives over to the depot which is where Charlie said he would meet with him. When he arrives, he notices a stray cat in a nearby dumpster. He grabs hold of the cat and puts it in an empty duffel bag. Mark rounds the corner, finding Jake Jolson, Eyebrows and Sparky, in lieu of Charlie. Before Mark approaches the three of them, Jake draws a gun from his jacket and points it at Mark, demanding him to hand over the cash. Mark questions Jake and asks where his son is. After a brief conversation, Mark throws the bag over to Jake who asks Mark if he really believed Charlie would keep his word. Mark responds by saying he didn't believe it and that it would be too much to expect any honour from the Jolson's, backhandedly referring to them as "maggots." Jake is confused by Mark's words and instead begins to open the bag that he believes contains the cash. Mark flees into the depot as the stray cat jumps out of the bag and scratches at Jake's face. Jake jumps to his feet in shock and pulls the stray cat away from his face. Jake, Eyebrows and Sparky then shoot at the cat as it runs away. Before following Mark into the depot.

Meanwhile, Mark hides behind a crate inside the depot as Eyebrows, Sparky and Jake enter it. Jake is furious and tells his men to spread out and find Mark. There are other members of the Bethnal Green Mob inside the depot who assist in the search. Eyebrows and Sparky split up as Jake waits by the entrance. Sparky heads over to where Mark is standing and the two of them engage in a shootout. Mark kills Sparky and shoots at Jake and Eyebrows who then run away. Jake is even more furious with Mark when Sparky is dead. Mark chases Jake across the depot, killing more of his men along the way. Jake flees up a set of stairs and then runs into a dark room, swearing at Mark for killing his friend Sparky. Mark chases after Jake into the dark room, but he is knocked out by Eyebrows who is waiting for him inside. Jake attempts to kill Mark by beating him to death in retaliation for Sparky's murder. Eyebrows tells Jake to stop because Charlie has plans for him. Suddenly, Charlie's voice can be heard and he tells Jake that Mark belongs to him.

Mark feels through the bag.

Mark: So this is what everyone's been dying for.

Mark: Liam... it's Mark. Things are lookin' up. I think I've just hit the fuckin' jackpot. I'm standing here with about 300 grand's worth of Yardie blood money.

Liam: You're gonna need it, mate. I don't think any amount of cash is going to get you out of this one.

Mark: You're probably right, but if we're to stand any chance, I'm gonna need this cash.

Mark: Not yet, but I think I've finally got it covered. I've got a plant inside Charlie's mansion and she's on the case, mate.

Liam: She must be pretty brave, man, or owe you a shit-load to take that lot on.

Mark: Yeah, I suppose she is. I mean she does, yeah. Look... you get your arse over to Rivington Street. It can't be long till the filth get here. The money will be in the boot and the keys will be on the driver's side rear tyre. I'll boost another one to get out of here.

Liam: What'll you be doin'? Won't Charlie be expecting the cash?

Mark: Look, don't you worry about Charlie or Jake. It's time I did London a favour and took care of those two.

Mark: What have I got to lose Liam, eh?

Liam: Only a pile of cash and your kid.

Mark: Look, if anything happens to me, you use the cash to take care of him?

Liam: You don't have to ask me.

Mark: Look, I've got to get out of here. Charlie's expecting me over at King's Cross.

Liam: Well, you do your worst, mate.

They hang up and Mark drives to the depot. At the depot, as he is walking through the parking lot, he goes to a dumpster he gets an old bag and he notices a cat sitting on top. He shoves the cat into the bag and heads to the location. Jake, Eyebrows and Sparky are waiting for Mark around the corner. They turn the corner and see Mark.

Jake: Oi, Hammond! You're not doing too bad, for a Collins boy. Now, hand over the fuckin' cash.

He aims his gun at Mark.

Mark: Don't insult my intelligence. Where's Charlie? Where's my boy? He didn't say anything about handing the cash over to you. You want the cash, you produce my boy now.

Jake: So much attitude. What do I do to deserve this?

Sparky: I don't know, Jake. It seems like no one appreciates a good guy these days.

Mark: Have we finished with the comedy routine?

Eyebrows: Yeah, we have. Now, hand over the fucking money.

He also aims his gun at Mark. Mark throws the bag to Jake.

Mark: You've got your fucking money. Now, finally, hand over my boy.

Jake: You didn't seriously think Uncle Charlie would play ball, did ya?

Mark: No, I didn't. It would be too much to expect any honour from the Jolsons. Honour amongst thieves, maybe, maggots, never.

Jake: What did he say? What the fuck is this stench?

Mark runs into the depot through a side door. Jake opens the bag and the cat jumps out on his face.

Everyone's guns go off at the cat presumbably killing it. Mark kills Sparky and shoots his way through the depot to chase after Jake.

Successfully completing this mission unlocks the eleventh mission in the game, The Prodigal Son. 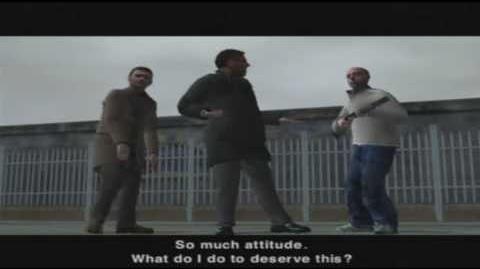 The Getaway - Mission 10 - A Cat in a Bag
Standard Version