A Touch of Class

"Your man Collins seems to have hired some dancing slut, goes by the name of Layla. She's one of Charlie's birds and he'd like you to politely ask her to come back."
―Harry

A Touch of Class is the eighth mission in The Getaway. It is given to protagonist Mark Hammond by Harry on behalf of Charlie Jolson.

After escaping from Snow Hill Police Station alive, Mark parks outside Charlie's depot and phones Harry. He tells Harry that McCormack is dead and lies that Yasmin is as well. Harry is pleased and reports the news to Charlie, who is stood next to him. Charlie feels he underestimated Mark's capability and decides to give him another errand despite Harry's earlier promise that Alex would be returned to Mark. Seen as Charlie lost one girl, he decides that Mark can get him another. It turns out that Layla, one of Charlie's old girls, has been hired by Nick Collins. She works as a stripper at his new club, Touch of Class, in Soho. Charlie tells Harry who in turn tells Mark that they want him to pick up Layla and deliver her to Charlie at his mansion in Mayfair. Mark complains to Harry and says he's better off taking his chances rather than continuing to serve Charlie. Harry shouts back at Mark who tells him it will end when Charlie says so. Mark is frustrated with his next task and complains to Yasmin. However, she tells him it's a good thing because it gives them a door into Charlie's mansion which is where she is convinced that he's holding Alex. Mark agrees and reluctantly drives with Yasmin over to Soho. On the way to Soho, Yasmin tells Mark that she used to work with Layla back in the day when she was a prostitue. They eventually arrive in Soho and enter the club. Once they're inside, a shootout breaks out between the Collins gang and Mark and Yasmin. Mark and Yasmin return fire and kill all the members of the Collins gang inside. Mark goes ahead and searches for Layla but can't find her.

Mark and Yasmin are sitting in a car outside Charlie's depot in King's Cross. He phones Harry.

Harry: Shame. Not a bad piece of crumpet, but you know women, mate, too much hassle.

He tells Charlie the news.

Harry: He's only gone and done it! McCormack and the bird.

Charlie: Seems we underestimated him. Well, seeing as I've lost one girl today, he can just get me another. I hear Layla's down at The Toucher, Collins' new bar in Soho. Tell Markie I'd kinda prefer if she was here with me.

Harry: Right, Hammond, head on down to the Touch of Class. Your man Collins seems to have hired some dancing slut, goes by the name of Layla. She's one of Charlie's birds and he'd like you to politely ask her to come back. Bring her to Charlie's gaff in Mayfair. You heard me. Get her and bring her here.

Mark: When's this gonna end, Harry? This is getting past the point of ridiculous. I'll never get in and out of there in one piece. I'd be better off blowin' the whistle and taking my chances. Maybe Jamahl and his Yardie-boys would like to know what's going on.

Harry: It ends when Charlie bloody says so, all right? I'm looking at your boy right now. Just move it.

Yasmin: What the fuck are you talking about?

Mark: Charlie... sending me on another suicide mission. Down to Soho, my old turf. He wants me to grab some dancing slut named Layla... and take her back to his house in Mayfair.

Mark: Perfect... Perfect. It's a fucking human sacrifice, that's what it is.

Yasmin: No, let's get her. It gives us a door into Charlie's place. That place is like a bloody prison. I'm sure that's where he's holding your boy. If I can get inside, I can get to him.

Yasmin: Yeah. And I'll settle the score with Charlie Jolson whilst I'm at it.

Mark: I'm not worried about scores, Yasmin. I'll worry about scores when my boy's safe, all right?

Mark drives to the Touch of Class and shoots his way inside.

Successfully completing this mission unlocks the ninth mission in the game, The Cowgirl and the Cash. 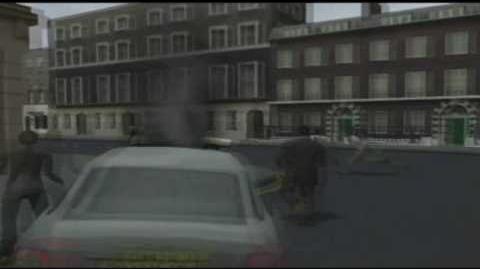 The Getaway - Mission 8 - A Touch of Class
Standard Version

The Getaway - Mission 8 - A Touch Of Class (HD)
HD Version