Land of Hope and Glory

"I was running this town when you were still being slapped by your dad for wetting the bed. I ran this town with real men like Ronnie and Reggie. With respect. We knew what was what and who was who. But now what have we got? Fuckin' spear chuckers, bringing in shooters where no one's safe, turning London into a madhouse. Smack heads, crack heads, mixing of the fuckin' races. Well, I'm sorry. Enough's enough. It's out of fucking order. You give these people a bit of space and what do you get? Fuckin' disorder. Well, it's gonna stop. And it starts... right now."
―Charlie Jolson

Land of Hope and Glory is the twenty-fourth and final mission in The Getaway. It is an independent mission for protagonist Frank Carter.

The games' storyline returns to where it left off after Mark Hammond had explained his story to all the gang leaders in the end cutscene of his final mission, Aboard the Sol Vita. Shan Chu Lee of the Triads, Jamahl of the Yardies and Nick Collins of the Collins gang, had all heard Mark's story of how Charlie had blackmailed him into doing jobs for him all over London in order to cause a gang war between the other gangs. Nick understood that Mark had only done the jobs because he wanted to save his son Alex from being killed. The gang leaders all agree to let Mark go but sticking to his word from earlier on, Mark tries to reason with Nick about sparing Frank because they would all be dead if it hadn't been for him. Nick tells Mark to shutup and says he's pushing his luck because he'll never help anyone who is a cop. Jamahl and Shan Chu Lee also agree with Nick and say they have to deal with him. Yasmin and Alex try to push Mark out of the room and Frank just tells them to leave. After the three of them leave the room, Frank shouts loudly that he doesn't need any help from criminal scum and calls everyone in the room criminal trash. Nick tells him to shutup as Liam Spencer pushes Charlie into the centre of the room next to his bomb. Charlie then begins to rant angrilly in front of everyone. He tells them that London has always belonged to him and how he was running the city when they were still kids. The city he once knew he no longer recognised due to the other gangs turning it into a mad house. Knowing the game was up and with all of his gang members dead, including his best friend Harry and nephew Jake, Charlie realises that he is going to die and decides to take out everyone else with him. Suddenly he goes berserk and tells all the other gangs that the carnage is going to stop and a new beginning is going to start right now. He produces the detonator that Jake had handed him and pushes down on it activating the bomb. Nick shouts at his men to shoot at Charlie realising he is going to explode the bomb. Frank quickly shouts at them to stop because if he lets go of the detonator then they'll all die immediately. Charlie begins to quote famous British sayings as the other gangsters and gang leaders flee the room. Frank runs up some stairs and picks up an AK47 dropped by an unconscious Triad who is knocked out during the carnage. Charlie is left alone in the room and doesn't try to escape. Instead, he begins to sing the classic British song, Land of Hope and Glory, accepting his inevitable death. The timer on the bomb begins to countdown and reveals that it will explode in three minutes.

Frank meanwhile exits the room and runs down a set of stairs shooting at a load of gangsters in front of him. Two Triads run past him and an explosion occurs as Frank reaches the bottom of the stairs. The stairs collapse and kill the two Triads as well as blocking the quickest exit off the Sol Vita for Frank. All the other gangs are shooting at each other in a massive gang war as the situation becomes an every man for himself scenario. Frank shoots his way through killing all the gangsters that attempt to stop him. He makes his way along a corridor, goes up a set of stairs and then down another set. He shoots his way through another storage room and then enters another corridor which he runs along. He follows the corridor and kills more gangsters who are all shooting at each other. When he gets to the end of the corridor, he enters another room which is the boiler room. He shoots some more gangsters in the boiler room and then climbs up two sets of stairs. He then heads out through an exit door right next to him and makes it to the deck of the ship. Once he is on the outside deck, the ship begins to explode. Frank sprints along the deck as fast as he can with the ship exploding behind him. He then jumps off the end of the ship and dives into the water beneath him. He manages to get off the boat just in time as it engulfs in flames and is followed by countless explosions. Frank escapes the ship alive with seconds to spare. The final shot shows the Sol Vita exploding and at the far right of the screen you can see Mark, Alex and Yasmin, crouching down on the ground alive. This is the same as how the very end of Mark's final mission occurred.

Continued from Mission 12 - 'Aboard the Sol Vita'.

Mark: What about the cop, Nick? He's been straight up.

Nick: Shut it, Mark. You're pushing your luck. I gave you a break because of Suze, but I'll never go out on a limb for the filth. I can't have the filth knowing my business.

Mark: You'd all be dead if it weren't for him, Nick.

Jamahl: You are a very lucky white man to be pushin' your luck right now.

Triad: No. Not police. We must deal with policeman.

Nick: That's enough from you, filth.

Liam pushes Charlie into the middle of the room.

Charlie: This is my town. Not yours, jungle bunny. Not yours and not yours either, you slanty-eyed fucker. Mine. I was running this town when you was still being slapped by your dad for wetting the bed. I ran this town with real men like Ronnie and Reggie. With respect. We knew what was what and who was who. But now what have we got? Fuckin' spear chuckers, bringing in shooters where no one's safe, turning London into a madhouse. Smack heads, crack heads, mixing of the fuckin' races. Well, I'm sorry. Enough's enough. It's out of fucking order. You give these people a bit of space and what do you get? Fuckin' disorder. Well, it's gonna stop. And it starts... right now.

Charlie pulls the detonator out of his pocket.

Nick: Somebody shoot the fucker. He's got a bomb!

Charlie holds the detonator up in the air.

Charlie: It's time that the Englishman stood up for what it is to be English. Fuck the euro! The fox and the hounds...

Frank: If he lets it go, it blows us all. Scarper! Now!

Charlie: Bobby Moore and the Hammers!

Guns go off all over the place and several gang members are shot. Frank runs
and picks up a gun and then runs out of the door. Charlie starts singing.

Charlie: Land of hope and glory... Mother of the free...

The timer starts counting down from three minutes.

Charlie: How shall we extol...

Frank shoots his way through the ship. He escapes to the top and runs down the side. He jumps off the ship just as it explodes behind him. 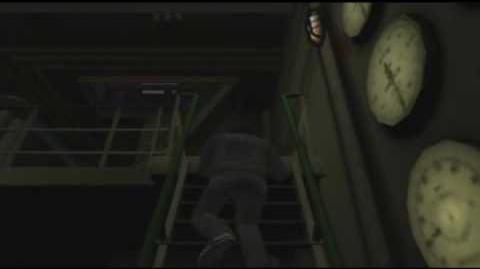