"All aboard the good ship Sol Vita! We're gonna show 'em what this country's made of, what we fought for! London was built on the Thames and that, my son, is exactly where it's going to end."
―Charlie Jolson

Meet Mark Hammond is the twenty-second mission in The Getaway. It is an independent mission for protagonist Frank Carter.

Frank sneaks through the cellar and hears Charlie's voice in the distance. He takes cover and spots Charlie Jolson, Jake Jolson and Harry all speaking with each other. Frank listens to what they're saying and hears Charlie talking about how everything will be like it was in the old days of London. Charlie states how he is going to show everyone who is in charge and rid the city of all the other gangs. Jake asks how they're going to do it and Charlie reveals that before Sparky died, he had developed a bomb for the gang. Charlie tells them that Eyebrows has put the bomb on board the cargo ship Sol Vita at St Saviour's, but the detonator is still at the depot. Charlie instructs Jake to retrieve it and explains he doesn't want it anywhere near the boat until it's ready to explode. If the detonator is pressed down, the timer is set, but if it's released, the bomb explodes instantly. Charlie warns Jake to hand him the detonator as soon as he arrives at the ship, and to be careful not to mess around with it. Harry asks Charlie what they're going to do with Alex Hammond. Charlie instructs Harry to get the boy from his mansion and bring him to the ship for explosion as well seen as they no longer need him. The three of them then leave and exit the cellar. Frank meanwhile heads towards a cell from where the three of them had come from and spots Mark Hammond and Yasmin lying down inside. He listens to what they're saying, and realises everything and how Charlie had blackmailed Mark into doing jobs for him across London by threatening his son. This is the same as the scene from Mark Hammond's mission, The Prodigal Son, as the two missions cross over. Frank reveals himself to Mark and tells him everything including the location of his son. Mark agrees to work with Frank if he releases him and the two form an alliance to stop Charlie. Frank pushes a gun under the cell door and then blasts the lock on it, releasing both of them. Frank then runs ahead and shoots his way out of the warehouse past members of the Bethnal Green Mob. He blasts his way upstairs quickly and kills a lot of the gang members as he pushes through the warehouse. After a shootout, he exits the warehouse, steals a car and makes a quick getaway. He then drives over to the depot in Kingscross which he visited earlier, in order to stop Jake and retrieve the detonator. He arrives outside and sneaks inside, passing members of the gang as he makes his way through. He see's members of the gang loading guns into a van to prepare for war. Frank takes cover behind some crates and watches them from a distance.

Frank sneaks down to the basement under Charlie's warehouse. Charlie, Harry and Jake are down here discussing their plan to Mark and Yasmin. Frank hides behind a low, crumbling wall.

They all leave the cell.

Frank: Jake Jolson! How many lives does he have?

Charlie: It'll be like the old days, lads when everyone showed a bit of respect. It's time we showed everyone in this town who's the fucking boss. Once we've had a spring clean and tied up all the loose ends, it'll be safe to walk the streets of London again. We'll meet at the boat.

Jake: What fuckin' boat? Are we gonna drop 'em in the river? I'd like that, I've always wanted to do that.

Charlie: No, boy, we're gonna do 'em in style. Sparky, God rest his soul, knocked up a little something for us. You like explosives, don't you?

Charlie: Well, thanks to The Brow, the bomb's on board. I need you to go up north to the depot and bring back the remote detonator.

Jake: What's it doing up there?

Charlie: Come here, use your fat head, son! I don't want that remote anywhere near the bomb until KABOOM time! You got that? That thing starts counting down as soon as I press it!

Charlie: Jake, don't fuck about, son. Press the button and the timer's set. Release the button and the bomb goes off instantly. So be fucking careful! Leave it to me and when we're safely ashore, sipping pina coladas, click. I'll put 'em all out of their fucking misery. It ain't a toy, son. When you get there, you bring it straight to me, you hear?

Harry: What about the kid?

Charlie: We'll get the boy. All aboard the good ship Sol Vita! We'll show 'em what this country's made of, what we fought for! London was built on the Thames and that, my son, is exactly where it's going to end.

Jake: Jesus, Charlie, Hammond was right, you are a bloody drama queen.

Charlie: C'mon, Harry, let's lead the lambs to the slaughter.

They walk off. Frank sneaks past the cell door and leans against it.

Mark: Now I'm truly fucked. I've committed every crime known to man to get my boy back and I find out I was just a pawn in that mad maniac's scheme. Those fucking Triad boys are really gonna enjoy feeding me to the fish.

Yasmin: You did better than most. Looks like everyone underestimated you. It's me who's messed this up. I'm supposed to be good at this, remember? Instead, I've been caught like a rat in Charlie's trap.

Mark: Yeah, well, at least you tried. At least I had one other person on my side. I just wish I had a little more time to spend with Alex before... I've been banged up for nearly all his life and when I finally get out, this shit happens.

Yasmin: I saw your kid.

Yasmin: He was OK. He'd been crying, but apart from that, he was all right. He must look like his mum cos he doesn't look much like you. I only saw him for a second anyway, before all of Charlie's hi-tech shit came crashing down around me.

Mark: You did better than I did. I didn't even get close. That fat slag will probably blow up half of London and I'll take the rap for that as well.

Frank: Oh, you're breaking my heart. Are you two just going to sit there feeling sorry for yourselves or d'you want to stop that little Hitler?

Mark: I know you. You're that cop from the prison van bust.

Frank: That's right and I'm the only fuckin' choice you've got right now if you don't want to end up wasting away in the nick.

Mark: Yeah? Well why does the Bill want to help me? You could make a name for yourself just by turning me in.

Frank: I know what he's up to, Hammond. I heard the whole thing. I need you alive to ruin his plan. You're no good to me dead. Besides, you wouldn't last a night in the cells of this town. Not after Snow Hill.

Mark: Look, as it is, I'm a dead man and so is my boy. You give it to me straight, Carter. What d'you want?

Frank: I'll take that as an agreement for now. For now you're working for me. You do what I tell you.

Yasmin: Don't fuckin' do it. Everybody knows he's just obsessed with nicking the Jolsons.

Mark: You get me out of here. You let me and her get my kid to safety... and I'll do whatever you want. Whatever it takes, Carter. You in?

Yasmin: I'll help you, but don't trust him. He's no better than Charlie.

Frank: That's good enough for me. OK, I'm going to blast this door. When I do, all hell will break loose upstairs. I'll try and cover you from up the wall. Take this shooter... and try and get out.

He kicks a gun under the cell door.

Frank: Remember, the kid's still at Charlie's gaff but you better hurry. Call me on this number when you've got him. I'll cut Jake off. Remember, Hammond, you owe me. You owe me your life.

Mark: Get one thing straight, Carter. I want Jolson as much as you, but we get my boy to safety first.

He stands back and shoots the lock on the cell door.

Successfully completing this mission unlocks the twenty-third mission in the game, Showdown with Jake. 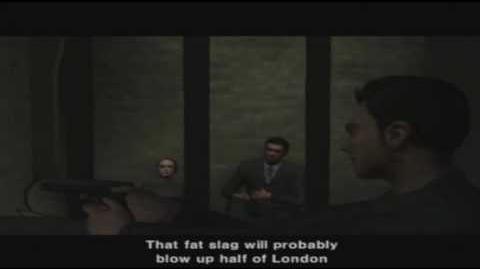 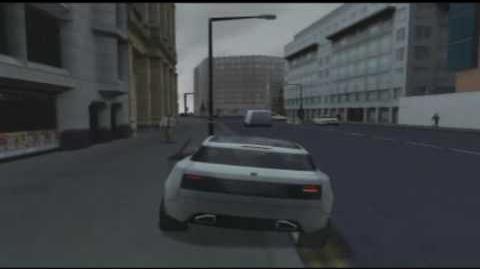