Out of the Frying Pan

"It's time to meet the relatives, Johnny Chai."
―Mark Hammond

Out of the Frying Pan is the sixth mission in The Getaway. It is given to protagonist Mark Hammond by Jake Jolson, as a continuation of the previous mission.

Mark pulls up outside the Siu Fung Restaurant and breaks the tapes around Johnny Chai's corpse. He then opens the door and dumps Johnny Chai's body in the street. Members of the Triads rush outside and realise Johnny Chai has been killed. Enraged, they chase after Mark just as predicted by Jake. Mark drives out of Chinatown as the Triads fire at him from the streets. He then drives across London over to Hollywell Street where Jake and the Bethnal are meant to be waiting for him, to ambush the Triads. Mark lures the Triads as they chase him, making sure he doesn't lose them, and after a dangerous chase across London, he arrives at Hollywell Street. However, once Mark arrives, he quickly realises that he's been set up, and that this area is actually owned by the Yardies and is their territory. Mark gets out of his getaway car and makes his way into the Yardie compound, killing several Yardies as he enters. He quickly takes cover as the Triads follow him and enter the compound. The Yardies and Triads then shoot at each other and the two gangs start a huge turf war. Mark realises he's been betrayed by Jake and that he'll have to fight his way through the gang war and kill everyone involved in order to survive. When the two gangs finish shooting each other and one of the sides has been beaten, Mark emerges from his hiding spot and finishes off any surviving gangsters. Once all the gangsters involved in the war are dead, Mark leaves the compound and heads onto the street, lucky to be alive and furious at Jake.

Mark makes his way to Chinatown and stops outside the Sui Fung. He starts pulling the tapes off of Johnny Chai.

Mark: It's time to meet the relatives, Johnny Chai.

He finishes ripping the tapes off and kicks Johnny out of the car. Two Triads run out wielding butcher knives.

Mark lures the Triads to Hollywell Street and realises it's a trap set by Jake. He is trapped in the middle of a gunfight between the Yardies and the Triads and has to shoot his way out.

Successfully completing this mission unlocks the seventh mission in the game, Filthy Business. 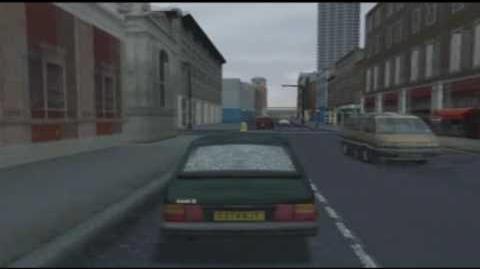 The Getaway - Mission 6 - Out of the Frying Pan
Standard Version