"Seems like coppers are more in danger from McCormack these days than they are from the villains."
―Frank Carter

Stalking McCormack is the nineteenth mission in The Getaway. It is an independent mission for protagonist Frank Carter.

Frank enters a room upstairs in the Yardie Crackhouse and finds the two rookies, Ryan and Harris tied up. They are badly injured but alive. Harris has passed out due to being tortured by the Yardies. Frank unties and rescues them. Ryan reveals to Frank that McCormack sent them there to try and uncover a link between the Triads and the Yardies which Frank knows is complete nonsense. He decides he's going to head back to Snow Hill and have it out with McCormack. Suddenly they hear shots outside as another gang war breaks out between the Triads and Yardies. Unbeknownst to Frank at the time, this has been caused by Mark Hammond during his mission Out of the Frying Pan, where he lured the Triads to the Yardie compound outside the crackhouse. Harris regains consciousness and Frank escorts both Ryan and Harris safely out of the crackhouse. He shoots several Yardies on his way outside and makes it to the street where more police officers are now present. Frank leaves Ryan and Harris in safe hands and then drives back to Snow Hill. When he arrives, he spots McCormack leaving and decides to tail him from a distance. McCormack drives slowly around London and Frank carefully follows him without drawing attention to himself. Eventually, McCormack arrives at a depot in Kingscross called Gilberts. Frank spots McCormack going inside and follows in after him. Once inside, Frank realises McCormack has been corrupt all along and is working for Charlie Jolson and is affiliated with the Bethnal Green Mob. Without being seen, Frank follows McCormack through the depot, taking cover behind crates and listens to what McCormack and the Bethnal are saying. McCormack gives orders to the gangsters and explains how they're going to sell Jamahl and the Yardies their own guns. The gangsters report that Charlie isn't going to like this, but some even state that Charlie is the past and McCormack is now running the gang. This is the reason why Charlie wanted him dead in the mission, Filthy Business, which chronologically takes place after this mission. After walking around the depot for some time, Frank looks out across the room and says he can now get McCormack with this incriminating evidence. Suddenly, Frank hears McCormack talking on the phone in the room next door. McCormack is speaking with Big Walter, a member of the Bethnal Green Mob. McCormack tells him the whereabouts of Joe Fielding, Frank's partner, who had been shot by Jake earlier. McCormack advises them to kill him now before the trial in order to protect Jake. Joe is being held at UCL Hospital, on the second floor. Frank decides he'll have to wait to get McCormack and instead rushes out of the depot in order to save his friend. Frank leaves the depot, gets into a car and races over to the hospital as fast as he can, with little time to spare. When he arrives at the hospital, he rushes upstairs to the second floor and finds Joe is safe and well.

Frank enters a room at the crack house and finds the two officers tied up back-to-back.

Ryan: Thank fuck you're here! Harris is either passed out or dead. I can't raise him.

He starts untying the two officers.

Ryan: As soon as we arrived, they just jumped us. It was like they knew we were coming and we just walked straight into it.

Frank: Yeah, I know the feeling.

Ryan: Sick fuckin' bastards! They could tell we knew nothing. And they enjoyed it. They got a kick out of torturing him.

Frank: Well, there's at least ten of them who won't be doing the Energizer bunny routine any longer. And this was McCormack's idea. Why did he send you here? What was he after?

Ryan: He said to try and uncover a link between the Triads and the Yardies. He's out of his mind. Anybody knows the Chinese have nothing to do with these guys.

Ryan: You said it, Frank. We tried to tell McCormack about Harris' snitch. He had the dope on a suspect crack plant south of here, but he didn't want to know. He sent us here instead.

Frank: Seems like coppers are more in danger from McCormack these days than they are from the villains.

Frank: Don't worry about it, Ryan. Get Harris on his feet. We've got to get out of here. Sounds like it's kicking off out there again. We can't wait for back-up.

Ryan: Where are you going?

Frank: Back to the station. I'm going to have it out with our DCI.

Frank helps Harris and Ryan to escape the crack house and then drives back to the station. As he arrives, he sees McCormack drive off. He tails McCormack to Charlie's depot. At the depot, he stalks McCormack around the depot and follows him up on to a walkway. He looks down at the depot.

Frank: My god! What have we got here? This is the gear from the Shad Thames bust. Oh McCormack you sly bastard, playing both ends off against the middle. I'll have you, you're mine now.

Frank hears a voice coming from a nearby vent. He leans forward and listens in. It is McCormack.

McCormack: Tell Charlie that he can find the rest of the gear down here just as we agreed. I don't want to know about that. You deal with it. He's your problem, you make your own arrangements. But if you want my advice, you'll do it now, before the trial. Yeah, Joe Fielding, Carter's partner. They'll be guards on the door, so take some friends. He's in the UCL Hospital, in the intensive unit, on the 2nd floor, that's all I know... Because it's sign-posted, you bloody idiot! That's all I'm giving you. He's your problem now. If Crazy Jake wants to go around shooting police officers, he better make sure he kills them so they can't testify against him. And Walt, don't fuck it up! There's enough problems with that crazy bastard Hammond shooting up half of London.

Frank: You'll keep, McCormack. There's no way those bastards are going to get to Joe.

Frank races to the UCL Hospital to save Joe.

Successfully completing this mission unlocks the twentieth mission in the game, Do the World a Favour. 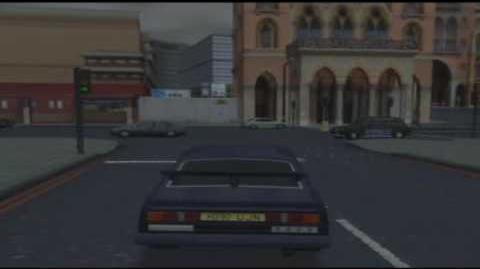 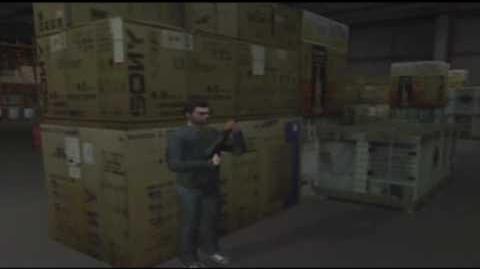