"Oh, you're breaking my heart. Are you two just going to sit there feeling sorry for yourselves or d'you want to stop that little Hitler?"
―Frank Carter

The Prodigal Son is the eleventh mission in The Getaway. It is given to protagonist Mark Hammond by Frank Carter.

Mark awakens in a cellar with Yasmin lying next to him. The two of them have been badly beaten and Charlie, Harry and Jake are stood over them. Charlie is angry at Mark for betraying him and reveals that he also managed to stop Yasmin from killing him back at his mansion. Mark asks why he hasn't killed them yet and Charlie reveals his final plan that he had been preparing all along. He has had enough of the other gangs in London and wants to remove them permanently. All of Mark's jobs have involved him weakening each gang and getting them into a violent gang war. Charlie's final plan is to lure all of the gang leaders to a secluded old cargo boat called the Sol Vita at St. Saviour's Dock. On board the boat is a bomb that when detonated will explode killing all the gang leaders and allowing Charlie to take over London. Charlie tells Mark that he is going to hand him over to all the other gangs. Because Mark has angered all the other gang leaders in London they will want to meet with Charlie in order to kill Mark and can then be lured on board the boat to their death. Charlie rings Eyebrows who tells Charlie that the bomb in board the boat. Charlie then rings each gang leader, starting with Shan Chu Lee, the leader of the Triads, then Jamahl, the leader of the Yardies and finally Nick Collins, the leader of the Collins gang. They all agree to meet Charlie on board the boat as they wish to kill Mark. Mark shakes his head in frustration and swears at Charlie. Harry asks Charlie what they're going to do with Mark. Charlie says he will have his men bring Mark and Yasmin down to the boat later and they'll also bring Alex on board as well once he's collected from the mansion. Charlie, Harry and Jake then leave as Mark and Yasmin talk with each other. Yasmin tells Mark she saw Alex briefly at the mansion and that he was alright.

Suddenly, they hear a voice from outside the cell in the cellar and see Frank Carter standing there with a gun. Mark recgonises Frank as the cop from the prison van bust from earlier on in the game and remembers him as the cop who was shot at by Jake. Yasmin knows who Frank is and warns Mark he's filth. Frank reveals that he heard everything Charlie said and wants Mark to help him stop Charlie as Mark is no used to him dead. Frank is obsessed with stopping the Jolson's and believes Mark can help him do it. Mark agrees if Frank will release him and Yasmin then also reluctantly accepts but warns Mark not to trust Frank. Frank is pleased and tells Mark to get his kid from Charlie's mansion. He then shoots at the door and hands a gun to Yasmin. Frank shoots his way out of the cellar and Mark and Yasmin then follow. Mark grabs a gun and shoots at members of the Bethnal as the two of them make their escape. When they climb the stairs out of the cellar, it is revealed that they are actually in Charlie's warehouse. Mark and Yasmin shoot their way past more members of the Bethnal and once they are all dead they make a quick getaway. They drive across London over to Charlie's mansion on Upper Brook Street and enter through the basement. Charlie's mansion has amazing security and once Yasmin and Mark are inside they realise the place is equipped with laser beams. If a laser beam is touched, then toxic gas enters the room and will kill them. Mark and Yasmin dodge the laser beams, and tred on pressure pads on the floor which turn them off and allow them to pass through. They shoot their way through the mansion and after killing lots of Charlie's men and avoiding the laser beams, they make it to the top floor of the mansion.

Mark wakes up in a cell next to Yasmin, somewhere under Charlie's warehouse. Charlie, Harry and Jake are standing over them.

Charlie: I hear you've been a bad boy.

Jake kicks Mark and pokes him in the side of the head with his gun.

Charlie: You betrayed my trust, Mark. If there's one thing I can't stand, it's a man who don't keep his word. Ain't that right, Yasmin?

He kicks Yasmin to wake her up.

Charlie: Didn't quite manage it, did you, darlin'? I think you're losing your touch or got your mind on other things, maybe?

Mark: Get on with it, Jolson. You've always been a drama queen. Why haven't you just clipped us?

Yasmin: Yeah, Charlie, the suspense is killing me.

Charlie: Really, children, there's nothing that would give me more pleasure. However, I've got bigger fish to fry. You see, everyone in this town, including my imbecile nephew, thinks I've gone soft, become a right soft touch, a regular pushover. I've got the baboons all over North London running guns doing crack, the fuckin' locusts with their smack in Chinatown, the fuckin' Collins' boy nonces muscling in on the skin trade. All on my manor. My fucking manor! Mine for 20 glorious years. They think they can eat away at me, like cancer, piece by piece, and I'll sit on my fat ass twiddling my thumbs. Well, they're wrong. Ain't they?

Charlie: I've had them jumping through hoops. It's been a fuckin' bloodbath. It's all down to you, my son. Well, now that I've got all them cockroaches down to a manageable level, I'm going to throw them a bone. A little ray of hope from soft old Uncle Charlie. Unfortunately, my son, it's going to be you, Mark, the prodigal returned, the bad boy that's burned up half of London.

Charlie: Eyebrows, you at the river? And the bomb? Good. We're all set for our little meeting then?

Mark: What does he want with a fucking bomb?

Charlie: This is Charlie Jolson. I'd like to speak to Mr. Lee.

Charlie: I hear you've been having a spot of trouble with the blacks and those wankers from Soho. Well, in the spirit of racial cooperation, I'm going to give you the boy that's been causing you all this strife.

Charlie: I'm sure you'll be interested in having a word with him.

Nick: Mark Hammond? You bet your fuckin' balls I would.

Charlie: That's the fuckin' spirit. We'll sort out a cushie little meeting point and I'll get back to you within the hour. We'll give him a proper little send-off. Just remember, it's an exclusive fuckin' engagement. You get one guest only. I don't want any of your heavies.

Harry: What about this heap of shit, Charlie?

Charlie: The boys'll bring him down to the party. I wouldn't want our Markie and his new bit of crumpet to miss this one. It's gonna be a blast! Come on, let's go and lay the table.

Mark: Now I'm truly fucked. I've committed every crime known to man to get my boy back and I find out I was just a pawn in that mad maniac's scheme. Those fucking Triad boys are really gonna enjoy feeding me to the fish.

Yasmin: You did better than most. Looks like everyone underestimated you. It's me who's messed this up. I'm supposed to be good at this, remember? Instead, I've been caught like a rat in Charlie's trap.

Mark: Yeah, well, at least you tried. At least I had one other person on my side. I just wish I had a little more time to spend with Alex before... I've been banged up for nearly all his life and when I finally get out, this shit happens.

Yasmin: I saw your kid.

Frank Carter sneaks past the cell door and leans against it.

Yasmin: He was OK. He'd been crying, but apart from that, he was all right. He must look like his mum cos he doesn't look much like you. I only saw him for a second anyway, before all of Charlie's hi-tech shit came crashing down around me.

Mark: You did better than I did. I didn't even get close. That fat slag will probably blow up half of London and I'll take the rap for that as well.

Frank: Oh, you're breaking my heart. Are you two just going to sit there feeling sorry for yourselves or d'you want to stop that little Hitler?

Mark: I know you. You're that cop from the prison van bust.

Frank: That's right and I'm the only fuckin' choice you've got right now if you don't want to end up wasting away in the nick.

Mark: Yeah? Well why does the Bill want to help me? You could make a name for yourself just by turning me in.

Frank: I know what he's up to, Hammond. I heard the whole thing. I need you alive to ruin his plan. You're no good to me dead. Besides, you wouldn't last a night in the cells of this town. Not after Snow Hill.

Mark: Look, as it is, I'm a dead man and so is my boy. You give it to me straight, Carter. What d'you want?

Frank: I'll take that as an agreement for now. For now you're working for me. You do what I tell you.

Yasmin: Don't fuckin' do it. Everybody knows he's just obsessed with nicking the Jolsons.

Mark: You get me out of here. You let me and her get my kid to safety... and I'll do whatever you want. Whatever it takes, Carter. You in?

Yasmin: I'll help you, but don't trust him. He's no better than Charlie.

Frank: That's good enough for me. OK, I'm going to blast this door. When I do, all hell will break loose upstairs. I'll try and cover you from up the wall. Take this shooter... and try and get out.

He kicks a gun under the cell door.

Frank: Remember, the kid's still at Charlie's gaff but you better hurry. Call me on this number when you've got him. I'll cut Jake off. Remember, Hammond, you owe me. You owe me your life.

Mark: Get one thing straight, Carter. I want Jolson as much as you, but we get my boy to safety first.

He stands back and shoots the lock on the cell door.

Successfully completing this mission unlocks the twelfth mission in the game, and the final mission as Mark Hammond, Aboard the Sol Vita. 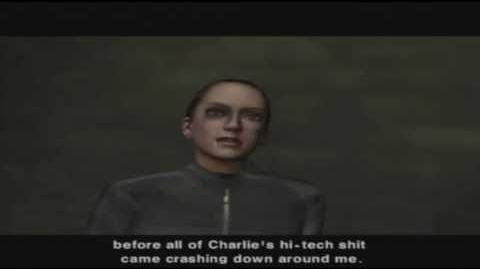 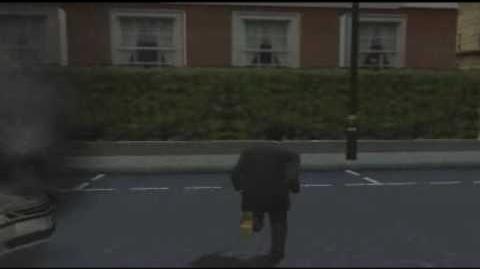